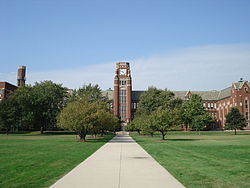 North Center is one of the 77 community areas of Chicago, Illinois, located in the city’s North Side. North Center is bordered on the north by Montrose Avenue, on the south by Diversey Parkway, on the west by the Chicago River and on the east by Ravenswood Avenue; it includes the neighborhoods of North Center, Roscoe Village, St. Ben’s, and Hamlin Park. The Brown Line of the Chicago ‘L’ has stops within the community area at Addison and Irving Park.

North Center was settled in the latter part of the 19th century and the early 20th century largely by Germans who worked in what is known as the industrial corridor along Ravenswood Avenue, and the large industrial plants along the Chicago River to the west.

It is highly recommended that you get a complete professional home inspection done on any home that you purchase in North Central. The unique architecture and ornate Victorian homes may have surprises or complications that an experienced home inspector can identify in their home inspection report.

North Center’s history is deeply rooted in European cultural influences, from German, Polish, Czech, Romanian, Serbian, Greek, Croatian, French making the majority and that history can be seen in the architectural charm of the homes and buildings from the late 19th and early 20th centuries. Also during this time, the Selig Polyscope Company produced some of America’s earliest motion pictures and was based in Chicago. Along Byron Street near Oakley Ave and Western Ave, historic production buildings of the company are still standing and being used as residences and retail businesses. The neighborhood continues to grow and become more culturally diverse. The neighborhood includes bowling alleys, three city parks – including an indoor ice arena, a nearby library, a nearby movie theater complex, and North Center Town Square. The North Center Chamber of Commerce hosts many free family and community events throughout the year. North Center Town Square is also home to a Farmer’s Market on Saturdays from June to October.

We have inspected many homes in North Central community, and have many years of experience with the homes in the neighborhood! Call us today to schedule a North Central home inspection.

Chicagoland Home Inspectors Inc. provides home inspection services in the North Central community, and have many years of experience with the homes in the neighborhood!

We offer sellers pre-listing inspection check on North Central homes with a detailed report of needed repairs before the property is put on the market.

The North Central home inspection offers detailed reports, if the property is a REHAB HOME.

If you’re buying a home in the North Central area, get it tested for radon. Radon gas is the number one cause of lung cancer among non-smokers, and the second leading cause of cancer in America.